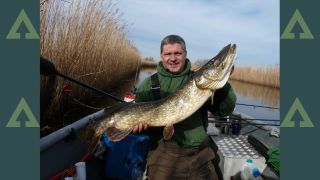 The location and feeding habits of pike changes throughout the year. Knowing these changes and relating them to a particular water will help to narrow down the search, and hopefully improve your pike fishing.

On some waters, the changes are so predictable that locating pike at a given time of year is relatively easy.

This can often be the time of year when lakes and stillwaters are frozen solid & rivers are too high and coloured, rendering them completely un-fishable. Some hardened pikers may still brave the elements, even break the ice to fish but from my experience, the results rarely match the effort.

This is often the most rewarding time of year for the dedicated pike angler. As the ice starts to thaw & water temperatures creep up to around 5 degrees, the pike start to move from deeper water and head to the shallower spawning grounds. Use your knowledge of the water to fish these areas at the right time and you could end the season in style. Not only can the fishing be relatively easy but with the larger females heavily laden with spawn, there is potential for a huge fish.

Spawning takes place during March or April. The males gather in wait in the shallower waters to be joined later by the larger females. During spawning, much the same as other species, the pike is too pre-occupied to be interested in feeding and responsible anglers will have hung up their bait rods in march to leave the pike to it.

Pike are generally more spread out, using weed cover to ambush their prey. They will also feed more frequently to increase body mass and improve condition in the lead up to the winter. Hence why mobile methods such as using lures is so successful at this time of year. This also explains why the match angler starts to think that the water is full of pike as one fish after another is snatched from his line. Pike rarely miss out on an easy meal, especially one looking so vulnerable as it steadily struggles by in a nice straight line.

From the start of the traditional pike season in October, as weed beds start to die off, the presence of pike becomes more visible as they start to actively feed. At this time the pike may become so pre-occupied with chasing their chosen prey that it’s difficult to attract them with anything else. By presenting a large bait in their feeding area, big pike can often be tempted away, preferring an easier meal, to that which needs to be caught.

With the arrival of the first frosts, temperatures plummet & prey start to migrate to the deeper water, closely followed by the pike. Knowing where the deeper areas are will greatly improve your catch rate. These areas may hold a large head of pike. Find these ‘seasonal hotspots’ and sit it out to ensure you fish them to their full potential.

Condition of the pike you’re fishing for

Following spawning the condition of the pike will be at its worst but it will soon be feasting heavily to improve it’s condition. All predators feast on the competition and whatever food source is readily available, so young perch and pike will be high on the menu.

Interestingly, perch spawn at the same time as the pike and their spawn looks very similar. Perhaps this is nature’s way of deterring these predators from eating each others spawn, giving both species a head start. This will not last long, as soon as the fry appear the immature predators will soon be feasting on each other.

The pike will of course come out on top as the off-spring grow bigger and more quickly. This is why most commercials who have adopted a policy of routine netting to remove pike, see a massive increase in other predators such as perch and in some cases zander. The pike’s earliest prey will be the closest available, which are perch and other smaller pike.

Perhaps this is imprinted for life, which would explain why pike self-predate to such an extent and perch remains one of the most successful pike baits.