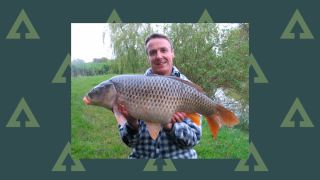 So how do you target those big carp on small waters?

We’re talking about better fish on well-stocked ‘ponds’ – the sort of waters you skirt round on the way to the ‘big lake’ or main lake on your local day ticket complex.

There are hundreds of waters like this up and down the country. And lots of theses venues have fish around or over the 20lb mark, fish that are well worth catching – especially on light specimen gear.

A small water that you can chuck a 2oz lead across – islands permitting, where the fish are never that far away. It’s got to be easy right? Wrong!

I decided to drop on one such water  that I’d been walking round  for two years and never given it a second glance.

That was until I heard of one or two decent fish in there. And then, for three or four months, it really got under my skin.

And here’s what I’ve learnt – my big carp from small waters Top 10 Tips.

1 Fish late in the day

The keen early morning arrivals have come and gone in those last two, three or four hours..

Although you’ve probably got to be off by dark, those final hours can be a great time for a bite or two as the fish can really turn on.

You can end up with the fishery to yourself. If you can get a half-day or cheaper evening ticket, even better.

A lot of bigger fish – the upper-doubles or 20s on waters full of smaller carp, tench, bream, roach etc can be nicked out of the edge. Later in the day is the best time to do it.

Whether they’ve got use to patrolling the edge picking up discarded bait from the day anglers or whether it’s just that the bankside is lets face it, often the biggest feature, who knows.

Either way, those bigger fish can often be right under your feet.

It goes without saying that on such intimate venues and fishing just over ‘the stalks’ that bankside noise needs to be kept to a minimum.

Try and lower or swing baits into position, don’t cast.

4 Awkward swims? I love them

That’s exactly where a good fish or two can be holding up often because it’s nice and quiet and gets walked past rather than fished.

Those two bushes with a small gap between them in a corner swim where only the one side of the bush can be accessed from the permanent pegs.

Get a rod and lower a bait tight into the gap itself, if you’re allowed. As long as you know you can get a fish out. Last time I did it I had a 20, one of only a handful in the lake.

Even if boilies, pellets and hemp are banned, you can get round it.

I had success on chunks of ragged meat lowered in on a two bait PVA stringer, with a Peperami hookbait.

This was all dipped in a krill dip and rolled in krill powder for a big hit of attraction in the water column.

Takes can come very quickly with a combo like this, in the right place.

With thousands of hungry mouths in this type of water, you need to know if you’ve been ‘picked up’.

Mini tench, 8 oz ‘scamp’ carp they can all leave your rig in an unfishable tangle.

I couple this with slack lines or a light bobbin and my Delkim sensitivity cranked up, but volume down.

Keep an eye on your line below the rod tip for signs of bangs, knocks and activity.

7 One rod is all it takes

Don’t be put off by ‘one-rod-only’ waters. That’s all you need to land a good fish.

If anything it’ll put a lot of mainstream ‘multiple rod’ carpers off, so that’s less competition for you.

Don’t sit on top the fish as you can very easily spook them.

It’s important even if you’re lowering a rig by hand down the edge, literally an inch or two out, or dropping a rig in and walking your rod back along the margin 20 yards.

A bit of putty tungsten putty or fluorocarbon main line can be useful in the latter scenario.

It will help you sink the line between rod and rig, providing there aren’t too many branches littering the bottom.

It’s one of the most selective methods there is for big fish. If it warms up get those floaters out.

Warm evenings can be ideal, even in coloured water, the size of the mouth will give the biggest fish away.

You can literally lower a freelined piece of bread crust, cat or dog biscuit right onto a feeding fishes nose.

Just be careful to let the fish turn after engulfing the bait so you don’t strike the hook straight back out. We’ve all done that.

Whether floater fishing or bottom bait fishing I like to drip a few freebies into any appealing spots – snags, bushes, alongside rush beds, and keep an eye on them.

You can’t miss the sound of slurps from a carp mopping up floaters that have drifted into a bush, or amongst margin stalks.

You might have spooked a fish or heard a fish crash, note the area and go and investigate.

Lower a hookbait over those half a dozen flavour laced freebies you’ve fed too, in a swim you’ve rested, to see if anything’s moved in.

The method lends itself to travelling light, one rod, a rest or two, landing net, unhooking mat and some bits. It’s all you need.

You’ll soon work out the carp’s favourite haunts and hopefully be able to pick fish off from them in rotation.