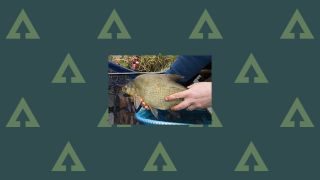 Is it time to ditch your keepnet? (Image credit: Angler's Mail)

Do you use a keepnet? I rarely do any more… except when I take in the occasional match or fish big waters.

Yet, years ago I would be disgusted when a fishery said I couldn’t use a keepnet. In fact I used to avoid anywhere where I wasn’t able to retain my catch until the end of the day. Over the past few years an increasing number of venues have imposed no-keepnet rules, mostly to protect fish against the transfer of diseases.

But I think this rule has also helped people catch more fish!

Besides wanting to see what I had caught at the end of the day I also had the belief that if I put a fish straight back it would spook any of its mates that were nearby. Now I think the opposite! I think fish detained in keepnets actually send out signals to other fish nearby warning them that something isn’t quite right.

When I have retained fish in nets I’ve had some decent catches. But when I have put fish back I’ve often had even bigger bags of fish. Doesn’t make sense does it? But it is true.

Of course, like most things to do with fishing, this is something very difficult to prove. Recently I’ve caught a lot of fish down the edge, as you do at this time of the year. Now, if I had used a keepnet that would have taken up space where I could have caught. Indeed, last week my wife and I went out and fished the same swim, one side of the swim each. If we had used a keepnet we wouldn’t have had enough space to do that.

Yet, despite lots of splashing from fish hooked in shallow water and every fish being slipped gently back, we caught virtually ever put in, all evening. The same thing has happened on lakes and rivers – but I am not yet convinced on canals as I haven’t thought this one out enough on those venues.

On larger stillwaters I think you can use a keepnet. The main reason being that you are often fishing at distance and any fish taking a rest in the net don’t send out any signals to shoals that are too far away. Don’t get me wrong. I have nothing against keepnets, providing they have the Fish Safe standard, are not overcrowded and fish are not slid down the whole length of them as they are returned or put on scales.

I have had repeat catches, fish that have taken baits not long after being returned to the water. I don’t know how long it takes a fish retained in a net to build up confidence to feed again. But I’ll bet they don’t go for baits straight after being returned. Some fish, of course, do not like keepnets. Bream can rub off vital slime and you may have noticed how some go red. Carp fins can catch in non-carp mesh and barbel have a distinct dislike of being retained. And mixing large and small fish in a net – something thankfully outlawed in most matches – is a definite no-no.

So next time you go out think about leaving that keepnet at home. Do you really need to retain fish?

Enjoy catching them. Admire them. Take a quick picture and slip them back. You might just end up catching a few more…