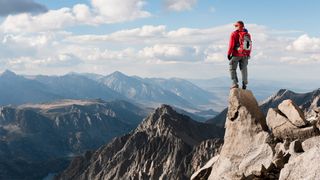 If you love the great outdoors, Advnture will feel like home. Whether you’re into camping with the family or epic solo hikes through the wilderness, we’re an essential part of any adventurer’s kit.

As the home of outdoor buying advice, Advnture is packed with buying guides to help you to choose the best equipment to suit your needs, as well as how-to guides, first-person experience stories, and essential news stories for anyone who loves getting outside.

Our writers are all experts in the field, having clocked up many years braving the elements, whether up mountains or under canvas. When they say a hiking boot, backpack or tent are the best on the market, you can rest assured they know what they’re talking about.

So whether you’re looking for the best equipment for your next adventure or simply want to learn how to pitch a tent, Advnture is the destination for you.

Abbie runs Spend More Time In The WILD, a campaign and YouTube channel that seeks to inspire and empower individuals to get outside for the benefit of mental and physical health, while building meaningful connections with the natural world and each other. Abbie’s area of expertise is long-distance backpacking – in other words, she likes to hike a long way carrying heavy stuff. She loves wildflowers, dogs, playing the handpan and maintaining her existence through drinking a never-ending stream of tea.

A seasoned writer and editor in the endurance sport space, Casey has worked with top athletes and coaches on training books and memoirs. A regular contributor to Women's Running, she especially loves writing about running and hiking adventures, which have taken her on trails around the world – including to the Indian Himalaya, the DMZ in Korea and the Tibetan Plateau. She lives in Colorado, where she’s slowly chipping away at hiking all the state’s ‘14er’ mountains.

Dwayne came to the UK aged six and spent his formative years in inner-city London where, wrapped up in the world of street gangs, he became a victim of both knife and gun crime. After a life-threatening incident, Dwayne decided to change his life and reconnect to nature and the outdoors, which he’d enjoyed in his early life in the forests and hilltops of rural Jamaica. In 2010, Dwayne successfully set out to become the first black Briton to walk over 400 miles to the magnetic North Pole. Ever since he has lived a life of adventure and exploration, inspiring young people nationwide to explore the ‘great outdoors’ which has earned him the City of London’s highest honour, the Freedom of the City.

An outdoors writer and editor, Matt Jones has been testing kit in the field for nearly a decade. Having worked for both the Ramblers and the Scouts, he knows one or two things about walking and camping, and loves all things adventure, particularly long-distance backpacking, wild camping and climbing mountains – especially in Wales. He’s based in Snowdonia and last year thru-hiked the Cambrian Way, which runs for 298 miles from Cardiff to Conwy, with a total ascent of 73,700 feet – that’s nearly 2½ times the height of Everest. Follow Matt on Instagram and Twitter.

A former brand ambassador for Merrell and current Ordnance Survey #GetOutside Champion, Jessie Leong’s lifelong outdoor odyssey began with Duke of Edinburgh’s Award walks in the Peak District. This segued into long hill hikes in the Yorkshire Dales, multi-day treks in the Lake District, scrambles in North Wales and adventures scaling alpine pinnacles. When not walking, she can be found rock climbing, wild swimming, cycling, photographing, filmmaking, writing and modelling. Jessie’s most recent claim to fame is playing a Miss World contestant in the 2020 feature film Misbehaviour.

An award-winning travel and outdoors journalist, presenter and blogger, Sian regularly writes for The Independent, Evening Standard, BBC Countryfile, Coast, Outdoor Enthusiast and Sunday Times Travel. Life as a hiking, camping, wild-swimming adventure-writer has taken her around the world, exploring Bolivian jungles, kayaking in Greenland, diving with turtles in Australia, climbing mountains in Africa and, in Thailand, learning the hard way that peeing on a jellyfish sting doesn’t help. Her blog, The Girl Outdoors, champions accessible adventures.

After spending a decade as editor of Country Walking, the UK’s biggest-selling walking magazine, Jonathan moved to edit Outdoor Fitness magazine, adding adrenaline to his adventures and expeditions. He has hiked stages or completed all of the UK's national trails, but was once overtaken by three Smurfs, a cross-dressing Little Bo Peep, and a pair of Teletubbies on an ascent of Snowdon. (Turns out they were soldiers on a fundraising mission.)

Brian is an award-winning journalist, photographer and podcaster who has written for Runner’s World, The Times, Outside, Men’s Journal, Trail Runner, Triathlete and Red Bulletin. He's also the author of several books, including Kicksology: The Hype, Science, Culture and Cool of Running Shoes. He lives in Boulder, Colorado, and loves to run, bike, hike, camp, ski and climb mountains. He has wear-tested more than 1,500 pairs of running shoes, completed four Ironman triathlons, as well as numerous marathons and ultra-distance running races.

After a wild childhood in west Cork, Jasper Winn began embarking on long cycles, walks, horse journeys and kayak trips across five continents – adventures he’s decanted into books, magazine articles, radio and television documentaries. Keen on low-tech but good gear, Jasper is an advocate of slow adventures by paddle, pedal, saddle, boot and sail. He has circumnavigated Ireland by kayak and cycled across the Sahara. Twice. Having ridden north-to-south across Algeria he discovered the only way to get back was to turn round and pedal north again.

An adventure writer based on Dartmoor, England, Emily is an active member of Mountain Rescue and a summer Mountain Leader, but loves all things adventure – before her third birthday she had lived on three continents. Founder of Intrepid magazine, she works to help break stereotypes about women in the outdoors. Her expeditions have included walking all Dartmoor’s 119 tors in a single two-week outing, cycling to Switzerland and back, and riding the Rhine from source to sea.

True to the independent spirit of the outdoors, Advnture takes pride in our reviews being free from commercial considerations. We don’t take money for reviews – all our star ratings are based on the honest opinion of our expert contributors.

In addition to our standard editorial content, we do run sponsored feature articles – these are always clearly marked and tagged as ‘sponsored’.

To enable readers to buy the outdoor products featured on Advnture, many articles feature links to the items on retailer sites – the prices are automatically populated from a selection of prices available from the respective sellers. Our parent company, Future Publishing, gets paid a small percentage of the purchase price – an ‘affiliate fee’ – if someone clicks through and buys a product as a result of using these links. The affiliate fee is not added to your purchase price so the price you pay is the same whether you click on the retailer via Advnture or you go to the retailer's site direct.

Advnture is a member of the Independent Press Standards Organisation (which regulates the UK’s magazine and newspaper industry). We abide by the Editors’ Code of Practice and are committed to upholding the highest standards of journalism. If you think that we have not met those standards and want to make a complaint please contact us by calling 01225 442244 or writing to us at Future Publishing, Quay House, The Ambury, Bath, BA1 1UA, UK. If we are unable to resolve your complaint, or if you would like more information about IPSO or the Editors’ Code, contact IPSO on 0300 123 2220 or visit www.ipso.co.uk.