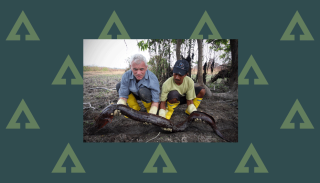 Dubbed “The Electric Executioner”, the electric eel is the fascinating target for Jeremy Wade in the fifth episode of his latest River Monsters series on ITV.

Angling fans in their thousands will be watching as Jeremy Wade returns to the Amazon. He goes there to search for a mysterious and deadly killer with a reputation to match its awesome ability.

Hearing the stories of three cowboys dying at the same time without any bite marks on them, he rules out piranhas and stingrays.

After hearing a witness’s claim, he concludes that the killer was an electric eel: an 8 ft, snake-like fish that possesses the bizarre ability to produce up to 600 volts of electricity.

Following stories of “invisible powers”, he journeys all over Brazil, searching for the elusive fish. Jeremy then comes across a story that confirms the eel’s ability to kill a man, but he still tries to find out if it can kill three as the story claims.

After searching through the smallest of ponds he can find in the dry season, he finally finds a large eel in a pond that is little more than a mud-puddle.

After fishing it out, Wade makes a startling discovery that could possibly explain three men dying at once.

But what about the tactics? Jeremy commented: ‘In this particular situation, there was no point in using bait because there was a much quicker and easier way of getting it out of the water…’

Here, we reveal some more about Jeremy’s latest conquest, the electric eel…

The electric eel is one river monster that could quite literally give you a jolt if you come across it. That’s because this eel is what’s known as an electric fish, which simply means that it can produce and sense electric fields.

The electric eel uses these fields to electrocute its prey and help it interact with other eels. It can grow to 8.2 ft (2.5 meters) in length, and upto 44 lb in weight, and discharge more than 600 volts of electricity. Getting shocked by an eel can cause respiratory paralysis and cardiac failure.

Electric eels swim around in the waters of Guatemala, Argentina and the Caribbean island of Trinidad. They are primarily aquatic creatures, although they can survive for several hours out of the water as long as their skin stays moist.

Electric cells line up like small batteries and run down the length of these eels’ bodies, giving their heads a positive charge and their tails a negative one.

The longer the eel, the more powerful a shock it provides. Because they don’t have teeth, electric eels swallow their meals — which include fish and small mammals for adults and invertebrates for younger eels — whole.

This species has been known to catch its prey by forming a C shape around animals and rendering them unconscious with a strong electric pulse.

Electric eels are nocturnal creatures that don’t see very well. Their bodies compensate for their poor vision by producing pulses of low-voltage electricity that help them to maneuver in dark rivers and lakes. Basically, the eels release electric signals from their tails into the water, creating electric fields that are similar to magnetic fields.

When a fish or other animal enters into an eel’s electric field, the signals change, alerting the eel and letting it know the location, size, shape, distance, and even the gender and age of the intruder.

Electric eels can tell if creatures moving in their electric fields are suitable mates or predators. This field also helps eels hunt for food hiding in murky waters.