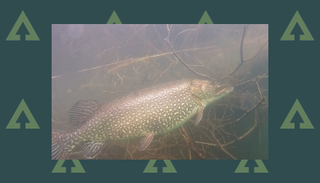 Still the English record, it fell to Wyndon Coole and came agonisingly close to the 46 lb 13 oz record boated by Roy Lewis in South Wales back in 1992.

The water where Wyndon’s catch still lives is Wykeham Lakes in North Yorkshire. It’s a syndicate venue that also contains some other large pike.

But they aren’t easy to catch, far from it… making the new video footage, below, extra special.

The pike in the video had not been seen since or caught since November 2015… until Mark Barrow managed to film her in mid-April 2018.

Mark, who films for under the banner Beneath British Waters, said: ‘I spent a whole five minutes filming her via video camera underwater and the video footage itself is amazing.

“I was literally 12 inches away from her as she just lay there and resulted in some of the best footage I have ever gained.”

Mark shared more about his searching of fish to capture on video in their natural habitat.

Talking about the Wykeham Lakes 30-pounder (in the video above) he said: “I spent a whole two hours searching the lake and kept seeing pike in the distance but could not get near one.

“Then I decided do drop down in depth to 4 metres and slowly come up a particular slope at the very slow speed making hardly any movement.

“It was at that point I noticed a pike but never realised how big she was until I got closer.

“Upon seeing her I stopped all movement and just allowed momentum to move me in close.

“To get this close to such a huge fish – not the biggest in there – was, for me,  a huge achievement.

“The pike in Wykeham Lakes really are in superb shape. I have filmed at Wykeham Lakes for the past four years, with good friend Alan Gee.

“I share my footage through my social media pages called Beneath British Waters where fisheries or angling clubs get in touch for us to film,” added Mark.