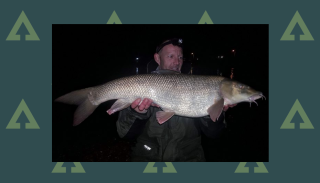 The haul of big River Trent barbel came when Tony had a 60-hour session at Newark, Nottinghamshire.

Littleborough, Greater Manchester-based Tony told us all about how he and his pal approached the famous stocks of big River Trent barbel…

Tony said: “I drove the four hours to meet my friend Pete. We catch up a few times a year for a few days fishing as he lives in Kent.

“The river was up and quite fast but 5 oz leads were holding nicely.

“In the next six hours I banked six barbel, all coming on the same spot, with not even a twitch on the right-hand rod.

“Pete, 20 yards downstream, had not had a bite and was getting frustrated.

“We then blanked the first night and the whole of the next day and night.

“On the last day, I talked Pete into staying put but I promised we would make a move by 2 pm if nothing showed.

“It didn’t, so Pete decided to move and I still couldn’t bring myself to leave my swim as I had such a good first evening.”

Tony continued: “Within 20 minutes of Pete’s move he shouted he had a bite, and had a stunner at just over 12 lb.

“I walked back thinking: should I move?

“Just 15 minutes later his rod goes again and while he was playing it I decided to make the move at last. Pete then landed a new PB for both of us at 14 lb 7 oz.

“To beat my PB four times in one session with a 16 lb 7 oz fish included was just dream come true.

“I used 22 mm halibut pellet soaked in halibut oil on the hair and in my feeder I have a mix of white crumb, hemp, peanut butter, tinned tuna and micro pellets. I bind it all up with molasses,” concluded the 44-year-old engineer.