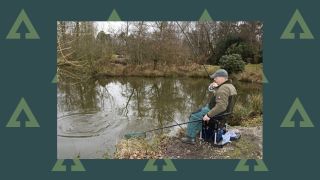 In my mind, once we have had the first frosts and a few leaves start to fall off the trees it’s into the final season of the year.

But don’t pack up your gear until the thermometers start to rise again as you may miss out on some great sport.

There are just a few things you need to remember that could help you catch a few fish during the colder parts of the year.

In fact, if you get tactics and feeding right winter can give you some massive bags of fish.

1. Just because you haven’t had a bite after a few hours don’t pack up and go home to watch the football on the telly. Winter fish can shoal up tight and leave vast areas without any finned friends. Try another spot.

2. As I have said above, fish can shoal up tight at this time of the year which means you can totally bag up whilst the guy next door can’t even raise an enquiry. That’s another reason for moving, adapting what you are doing and trying to enjoy that red letter day.

3. Time of day can be crucial in the colder weather. You may get an instant fish early morning when there is still frost about but it is more likely you will catch later in the day when the temperatures have risen – and the final hour of daylight when it starts to get darker is a brilliant time. It might start getting cold again but this is usually when fish have a late dinner!

4. Highly visible baits will often snatch a fish or two when other offerings fail. Bread and sweetcorn – which used to be regarded as a summer only bait – stand out in clear water and can be spotted more easily by the fish. As they are vividly coloured they may also cause a not-so-interested-in-feeding fish into being a bit greedy.

5. White or light orange casters can be great bait in winter for perch. Darker casters, even those that float, are loved by roach. The floating bait helps hold up your hook giving the offering a very tempting slow fall through the water.

6. Groundbait isn’t always the kiss of death you might expect it to be in the cold weather. But unlike your hookbaits it is worth using a darker feed rather than light. The dark colour means fish are keener to feed over it that a light bait over which they would stand out to predators like perch and pike. Riddle out the lumps that could feed fish up very quickly.

7. The natural instinct in winter is to use smaller baits in a bid to tempt reluctant fish. You could be surprised how a change to bigger baits (on bigger hooks of course) can pull a bite when all else has failed. Again, I think it is the greed factor that you bring out in the fish.

8. Swim cover in the form of trees, bushes, moored boats and other features are still very important to finding fish. But sometimes the fish will move away from these into open water where the temperatures could be higher because of a rare glimpse of sun. The fish often avoid being under trees where leaves have dropped into the water and rotted but you will still find them lurking in the areas where there were beds of reeds, lilies and rushes showing in the better weather.