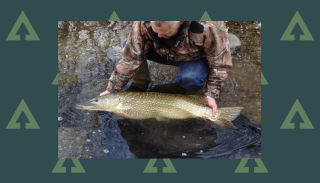 Harrogate-based Phil Hambly had the biggest pike at 35 lb. It’s pictured above, being returned.

And Richard Bartlett, from Leeds, chipped in with a 30 lb 12 oz giant as the trio made the most of a late-season opportunity.

How the Bellflask Fishery action unfolded

Brian said: “I had invited two friends of mine to come and have a go for the big pike before the end of the season.

“I had closed the trout fishery during February because the high rainfall totals had lifted the water levels over the paths around the lake.

“The water was still nice and clear, but choice of fishing spots was restricted.

“The morning was frosty, with no wind and a clear blue sky. It was beautiful, but not ideal fishing conditions.

“By midday a few nice pike had been caught and I had a 3 lb perch on a dead roach as well as eight pike. Early afternoon it clouded over and a slight breeze sprung up.

Brian said: “Phil hooked the first 30 lb-plus fish from the opposite side of the lake to me.

“He was partly hidden by bushes, but I knew it must be a good fish as Richard ran along the bank with his large landing net.

“Ten minutes later, Phil appeared round the bushes dancing up and down, waving his hands in the air.

“I was sitting very low to the water with a dead roach under a float very close in to the bank.

“Phil walked round the lake to tell me his pike was 35 lb. To say he was pleased was an understatement.

“He was just walking away when my small pike float bounced up and then slowly sank.

“I tightened up straight away as the bait was small and the pike thrashed on the surface before heading across the lake in to deep water.

“Phil netted it for me and this one weighed 32 lb.”

Brian continued: “No sooner had Phil walked back round the lake again when he was called to net and photograph another massive pike that Richard had hooked. This one weighed 30 lb 12 oz.

“Incredibly, in the space of less than one hour we had each caught and landed a pike over 30 lb.

“It was a great way to end the pike season,” concluded Brian.

The Bellflask Fishery owner also said recently how his venue’s fortunes have been turned around. Central to his policy, has been stopping predation by cormorants.