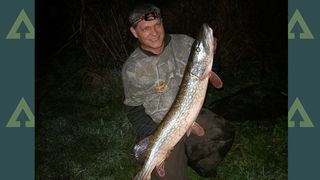 It’s a common myth that there’s no point pike fishing at night because pike cannot see well enough in the dark to feed at night.

As with all predators, the pike’s sensory organs are very advanced, which gives them the edge over their prey, hence why even blind pike have no problem striking at an individual fish amongst a shoal.

Some waters are renowned for catching pike in the dead of night but as a general rule, the first two hours and last two hours of darkness are best.

Reasons for this are sometimes unclear but it makes sense that the larger, more cautious pike will feed more confidently when there is no one about and the environment is quieter.

When fishing for pike I usually wind my rods in two hours after dark and re-cast them out two hours before day light.

Not only is it exceptionally rare to catch pike outside of these hours but also, landing and unhooking pike in the dark can be a ‘bit of a mission'.

It’s sometimes difficult to see the position of the hooks as the fish is netted, which results in a tangled mess. Not ideal during the day let alone in the pitch of night.

However, many years ago I started to target heavily-fished match waters at night with some surprising results.

It soon became apparent that the bigger pike were taking advantage of an easy meal by cruising up and down, picking up any dead or injured silver fish.

This was certainly the case on a number of match stretches of the Stainforth and Keadby Canal in South Yorkshire.

On many occasions I was catching good numbers of pike from a relatively small area but there was an unusual absence of bigger fish. Hence why the smaller fish were there in numbers.

The canals certainly sustained a good head of big fish and they had to feed too.

A few night sessions soon demonstrated that my theory was right. The bigger pike were taking advantage of the few casualties left by the matchmen and were predominantly feeding at night in these areas.

One factor, which I think may have some bearing here, is the water clarity. The ‘Stainy’ is gin clear most of the time. Perhaps the bigger fish also felt more confident under the cover of darkness.

It wasn’t long before I started to apply this theory to other match waters, with surprising success, particularly on canals.

The Chesterfield Canal was one such water where bigger pike were regularly caught during the night following a match.

The only exception to the rule is rivers. Unlike stillwaters and canals, river pike are generally confident feeders during the day due to the more coloured and moving water and so would not need to feed at night.

Match casualties would also be swept downstream, away from the match area.

One point of interest though, night fishing on the River Trent opened my eyes to the number of zander present.

Zander catches outnumbered pike by at least 10-1. A sign that the Trent zeds are thriving, at least on match stretches and around features. I’ll cover this interesting subject at a later date.

One word of warning though, night fishing for pike is only for the proficient piker.

Sometimes it’s hard enough during the day to land and unhook pike quickly and efficiently. In the dark, these problems are made far worse.

The biggest problem is not being able to see the position of the hooks when landing a fish. This often leads to trailing trebles being tangled in the net, which can make unhooking far more difficult and if not careful, can lead to damage to the fish as it thrashes about in the net.

The risk of getting a treble in your hand also increases, as does the chance of falling in so take special care. Fishing with someone else has many benefits and is much safer.

The key is to be well prepared and organised, have all the essentials close to hand.

Use sensitive bite alarms and never go to bed with the receiver, leaving the rods unattended. This may work for carp fishing but runs have to be hit quickly when fishing for pike to avoid deep-hooked fish.

Also have plenty of artificial light at the ready. It’s also far better if you fish with a friend and have a spare pair of hands to call on if needed. It’s much easier if one provides the light while the other gets on with the unhooking.

I also like to illuminate my floats so I have a rough idea of where they are, particularly as the pike comes to the net. A Starlite can easily be added to a dead bait pencil float by drilling a 5mm hole into the top, just deep enough to hold the Starlite in place.

If night fishing appeals to you, select the right water and the rewards could be great.