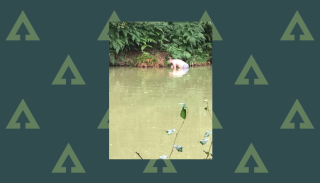 Frant Lakes in Kent posted the picture (above) with the statement: ‘This afternoon swimmer is part of an Eastern European five-strong team that has been reported to us for stealing fish here at Frant.”

The fishery also shared the registration number of an Audi estate car linked to the activities.

Frant Lakes owner Paul Bowman explained: “We decided to use social media to try to both deter and possibly apprehend the culprits.

“So far the post has been viewed 55,000 times and shared by over a thousand.”

Paul continued: “Many fine Eastern European anglers fish here but the Romanians who do this (stealing fish) seem to have no respect for the rules of the fishery or the law.

“They tend to have one English-speaking leader who buys the tickets for five of them then they are sometimes joined by others.

“They occupy a part of the lake away from the office then they secretly set up long lines with baited barbed hooks and they leave later after collecting the fish caught.

“This photo (of the swimming angler) was taken by a customer who spotted them in action.

“It is difficult for one bailiff to confront such a group on his own – even Environment Agency staff have started wearing knife-proof jackets – and it seems useless to report the matter to the police,

“I really don’t know what the answer is except to be more vigilant,” Frant Lakes boss Paul concluded.