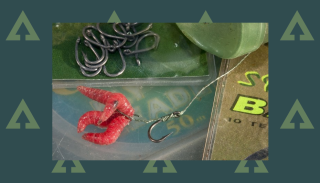 There seems to be a lot of confusion around regarding the visibility of red objects in water, and the colour red in general in fishing.

It’s a fact that red light penetrates the least through water, and that at certain depths red objects don’t appear red.

But some of the confusion seems to be being caused by the perception that red things will disappear in the absence of red light, and this isn’t the case.

The colour of an object is determined by the wavelengths of light which are absorbed, or more accurately those which are reflected.

However, in the absence of the colour that is reflected the object doesn’t disappear, it just appears grey. You can test this with a red torch at night.

If you shine a red torch onto green grass it doesn’t disappear, you can still see the grass, but it doesn’t look green either.

The same will be true of red line to some extent, in so far as in deep water the line will not look red.

It may well look less conspicuous than it does in shallow water, and less obvious than dark or light coloured line depending on the background, but it will be neither red nor invisible.

Why does red light penetrate less than other colours?

Visible white light is made up of light with a mixture of wavelengths, which when combined appear white.

Interesting things start to happen however when white light passes from air into a medium with a different density.

When white light is directed onto the surface of a glass prism at the correct angle, the difference in the wavelength of the different colours results in them bending, or refracting, to different degrees.

As a result, when the light emerges from the other side of the prism it has been separated up into its component colours, with the longest wavelength (red) at one end, and the shortest (violet) at the other.

It is a similar process which causes rainbows to form when white sunlight shines through moisture laden atmosphere.

When white light enters water the component colours with the longer wavelengths attenuate most rapidly, or penetrate the least.  Consequently, in deep water it is only light at the violet end of the spectrum which penetrates.

I have heard that signal crayfish have red claws which are used as a deterrent should any fish fancy it as a meal or gets too close. If red is the first colour to disappear under water, how can this be true?

American signal crayfish (Pacifastacus leniusculus) tend to live in shallow water, and as such some red light will still penetrate, and the claws will still in theory, appear red.

That said, in their native range one of the potential predators of signal crayfish are salmonids such as cutthroat trout, and studies have shown that salmonid fish cannot detect red light.

Rather than acting as a deterrent, it is possible that the red claws, and the white patches underneath are used to communicate with other crayfish, without being too conspicuous to passing trout.

If red light disappears under water why do red maggots still work?

Worms are naturally red, maggots can be bought dyed red, red groundbait is very popular and many anglers add red dye to baits such as corn and luncheon meat.

What about boilies? I wonder how many carp have been caught on red boilies over the years.

While red baits will still appear red in shallow water on a bright day, in deeper water these baits will not appear to be red – so why do they still work?

The truth is that the appearance of a bait is only part of its attraction, and there are many reasons why red baits still score.

The movement of maggots and worms are a big attraction to species such as perch, and while they may not look red in deep water, they are still visible, and the movement often triggers a fish to pick them up.

Baits such as corn and boilies attract fish with their smell and taste, and are still effective at night when there is no light, so their colour is less important.

Red groundbait is also attractive to taste and smell, but fish probably feel more comfortable feeding over a red or dark coloured groundbait, as they will be less noticeable to predators which view them from above.

So the remaining question is would baits from the other end of the spectrum work better in deep water?

In theory, if the colour was attractive to fish, then shorter wavelength colours should work in deep water.  Violet maggots anyone?

Why do fish have red features?

If red light disappeared completely underwater, you would expect there to be no advantage to aquatic animals exhibiting this colour, unless it was for camouflage purposes.

However there are a number of aquatic organisms which are either red, or have red body parts.

Some chironomids (bloodworms) are a deep red colour as is the eye of a tench, and the fins of roach and rudd.

Brown trout have red spots, and male minnows and sticklebacks develop a red colour during the spawning season.

Clearly, the colour red is not completely irrelevant under water, so why do these organisms go to the trouble of producing red pigments?

Well the reason is almost certainly different for each group, and it helps to look at the behaviour and habits of the organism to try and understand the significance of red.

For spawning minnows and sticklebacks the red colouration is a form of display, which because they live in shallow water will be visible to females of the same species, as well as other males.

It could be for example that the vibrancy of the red colour is indicative of the health of the individual, intended to attract a mate, or repel a competitor.

Many predators are known to attack the head end of a prospective prey item if they are unsure if they can swallow it first time.

One of the features which instantly gives away which is the head end of a fish is the eye, although the dark tail spots in some species are intended to counteract this.

In the case of the tench, it is possible that the red colouration to the eye, which is also very small, has evolved to allow them to blend in to their preferred weedy background.

While some chironomids are deep red colour, others are green, and some are almost transparent, so in this case, because they remain buried for much of their life, the colour may not be critical.

The colour red for predators

Some lures and bait flags are red – are predators attracted by the colour red?

Red bait flags are used for pike, and a number of popular lures are red, or have red on them.

I have even heard of people dying sprats red to use as bait for pike – so are predators attracted to red?

It is possible that in shallow water the red colouration of bait flags and lures could trigger an attack, but on the dull days of winter, these won’t look red except in the shallowest of water.

That said, there could be other advantages, and in the case of lures, two tone lures, like red and white, might show up against both light and dark backgrounds, which could result in more takes in the long run.

Other red lures, like the one which looks like a beer can, are perfectly designed to catch……………….anglers.