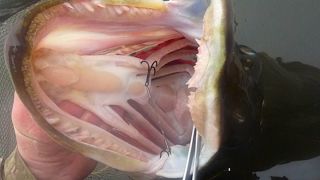 The pike is, of course, our biggest native freshwater predator and that’s the species we’ll cover here, but the same care and principles should be applied when handling all predators.

The zander is also an apex predator, and although non-native, is here to stay and fast growing in popularity as a worthy sporting fish.

Apex predators carry out an important role in underwater ecology. They appear to be tough, hardy creatures, which they are in their own underwater environment… but remove them from this and they are surprisingly fragile.

Special care therefore needs to be taken when landing, unhooking and handling predators to ensure that they are returned safely to the water.

Of course, predators also have teeth so proper handling protects us from injury too.

When it comes to landing pike, a large 40-inch triangular specimen net or 30-inch round net should be used.

Ensure the mesh is well sunk before bringing the pike over it, lifting the net to retain the pike.

Hold the net at both sides of the frame, gathering up the mesh to lift it just high enough off the ground to carry it directly to a suitably (large) unhooking mat.

Never allow the fish to be dragged along or laid on rough or hard ground.

Newcomers to piking may find the pike’s teeth a little intimidating and unhooking may seem a daunting task at first.

Many fish are injured during unhooking because of the lack of confidence of the angler.

This is completely avoidable by simply having the right tools for the job and a little practice.

Basic unhooking is very simply once you know how.

You’ll need a pair of eight-inch forceps to remove the hooks, a pair of long-nosed wire cutters in case you need to cut through the hook to make unhooking easier and a tough glove to give you confidence in avoiding the sharp teeth.

With your pike safely on the unhooking mat, the first thing to do is check to see where the hooks are before handling the fish.

Then, gently roll the pike onto its back. If it’s a large pike you might want to sit astride it to keep it steady while unhooking.

Place two or three fingers of your left hand (if right-handed) under the pike’s gill plates and slide your fingers down towards the chin and into the ‘v’ shape of the lower jaw, gripping the lower jaw firmly.

This is called the ‘chin grip’. The pike’s mouth should drop open as you gently lift the jaw.

If it doesn’t, apply a little pressure to the underside of the upper jaw with your thumb.

You will see that the teeth are located around the edge of the mouth, well away from your fingers.

Place gentle pressure on the trace wire and use the forceps through the mouth or gills to reach the hooks.

During unhooking, be particularly careful if you can’t see the position of the hooks so you don’t end up with them in your finger ends, it hurts!

Two pairs of hands are often better than one, especially if the fish is hooked deeply.

With modern piking techniques, runs are hit quickly so deep-hooking is rare.

Some pike may however gulp down baits, particularly small ones. In such cases the pike is likely to have at least one of the hooks in its soft stomach lining.

If this happens, extra care must be taken to remove the hooks without causing any damage to the pike.

Don’t panic, simply follow the same procedure as normal but apply a little more pressure to the trace, pulling it gently until you can see the hooks, unhooking with the forceps as they become visible.

This procedure can be speeded up by using the long-nosed cutters to cut the prongs off the hooks, making them easier to pull free. Do not cut the trace wire.

Experienced anglers usually add a snap link above the trace so if necessary the trace can be detached from the main line. This is useful if the pike thrashes around and tangles in the net.

Once your pike is unhooked you may want to transfer it to a suitably large weigh sling for weighing or if want to take photographs.

The ‘chin grip’ helps you to control the fish but you must also take the weight of the fish in your arms. This prevents the fish from struggling, being dropped or causing damage to itself.

Always keep the fish low to the ground and over the mat in case you do drop it.

Preparation is the key to efficient handling. Have everything to hand and ready for use including unhooking tools, scales, camera and have the mat and weigh sling wetted-up.

Experienced anglers often unhook and release pike in the water’s edge without removing the fish from the water. This greatly reduces the risk of causing injury to the fish.