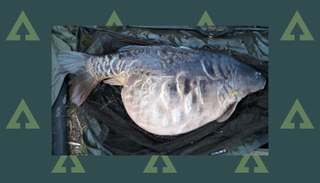 The biggest British carp ever was found dead at the venue being tipped to produce the next bona fide home-bred  record.

The Big Plated mirror was caught fairly on rod and line last November at a bloated 83 lb 4 oz at Kent’s Wingham Fisheries.

Despite being the biggest British carp, at that massive weight, it was a catch never destined to become the official No.1.

The captor and fishery both knew it couldn’t be claimed as a British record at the time as it had put on 30 lb with spawn and water to reach that 83 lb mark.

Wingham boss Steve Burke said: “It’s with great sadness that I have to report that the Big Plated has been found dead in the Carp Lake.

“This was the fish that was caught last year, almost 30 lb above her natural weight.”

Steve continued: “There’s been much speculation about Wingham producing a record carp.

“It’s possible that it will do so in the future, but it’s much more likely to come from the Main Lake.

“I’m convinced that the only reason that Wingham has produced so many 50 lb-plus English carp at such a young age is the lack of fishing pressure, and in fact this has been deliberate policy since the start of the project.

“I’ve always allowed even less pressure on the Main Lake, that I fully opened to carp fishing only three years ago.

“This was to let the carp grow in peace, and they’ve done so at an even faster rate than in the Carp Lake.

“They’re several years younger, and it’s expected they’ll surpass even those in the Carp Lake before long.

“The biggest fish in the Carp Lake is Black Spot and she was caught recently at 60 lb 12 oz. The Main Lake fish have already almost caught up, and the lake record was recently raised to 57 lb 10 oz.

“We’re very excited about the future prospects, in particular for the Main Lake,” concluded Steve.

In the lists of biggest British carp, Dean Fletcher holds the official carp record with a 68 lb 1 oz giant.

That mighty mirror carp, The Parrot, lived in Berkshire’s Wasing Estate but it has sadly now passed away.

A heavier carp, called Big Rig, came from RH Fisheries in Shropshire in 2016.

This immense fish was rejected by the British Record Fish Committee as a ‘cultivated fish’ having been grown to a size near the record before being stocked. It is also now dead.

And in December 2017, another claim for the official biggest British carp was slung out, but on an unusual technicality.

The committee rejected Nigel Ludbrook’s claim for Captain Jack from Cambridgeshire’s Holme Fen at 68 lb 8 oz as official scales tests indicated they were overstating the weight by at least 8 oz.