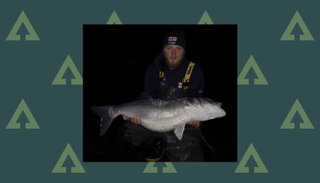 The bass record breaker fell to Guntars Zukovskis on a local Somerset beach while targeting conger eels in stormy conditions at night. He weighed it on digital scales at an incredible 22 lb 2 oz.

Guntars told us: “The weather was terrible that night, and I was in two minds about going. Luckily for me, I decided to brave the storm and give it a go.

“I had to stay well back from the water, it was that rough, but fortunately the wind and rain abated somewhat while I was landing the fish.

“I was after congers with whole mackerel baits on strong tackle, which helped me to land the bass.

“I just couldn’t believe the size of the big one. After weighing it, I returned the fish unharmed, making sure that it swam off safely.”

Guntars continued: “I had no witnesses, but I will still try to claim the British bass record, as I took a video of the weighing.

“Even if it’s not accepted as a record, the catch will go down in history as the biggest ever. Nothing can take away the pleasure of catching a fish of a lifetime.

“I love sea fishing, and go whenever I can, usually about twice a week, mainly from the shore, but I also go kayaking in calmer conditions.

“I lived too far away from the coast to go sea fishing while growing up in Latvia, but I have really got into it since moving here nine years ago.

“I’ve had some pretty good fish, including a smoothhound of 16 lb 12 oz last year and congers to nearly 20 lb.

“When conditions are too bad for sea fishing, I enjoy deadbaiting for pike, and my PB is 22 lb,” Guntars added.

Due to strong winds, Guntars was unable to get an accurate weight reading of the small, lightweight sling that he used to cradle the bass.

As this article went to press, he was arranging for it to be carefully weighed, but expects it to scale 4 to 6 oz, reducing the 22 lb 2 oz weight slightly.

It’s still way clear of both bass on the offical record lists.

The 19 lb 12 oz British shore-caught bass record has stood since 2012. That giant came from a dockyard in Portsmouth, Hampshire, to John Locker.

Guntars’ incredible catch is also heavier than the official boat-caught bass record of 19 lb 9 oz. That fish fell to Paul McEwan when fishing just off Herne Bay, Kent, way back in 1987.

Guntars' catch also beats this bass caught by Oban Jones, which was landed in December 2019.

Jones is adamant that his boat-caught fish off Plymouth in Devon was above the official British bests.

The experienced 19-year-old, who works at Devon’s Plymouth Marine Laboratory, thinks it was about the 22 lb mark.

But in accordance to strict byelaws by the British Marine Management Organisation, Oban put the fish back. That meant he couldn’t even try to claim a record.