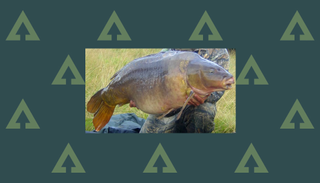 The famous mirror lived in Mid-Kent Fisheries’ Conningbrook  venue, having been stocked into the lake at 12 lb in 1982. After a hard winter followed by a tough spring, when the fish’s body was found by the venue manager there wasn’t a blemish on it – no scars, ulcers or damage.

Conningbrook is a tricky season ticket water where  carpers are vetted before being allowed to fish. Many bank hours, nights and days were spent by the hardcore specialist anglers who dedicated their fishing to the lake.

Two Tone – so named for its distinct “half and half” coloration – finally overtook Wraysbury’s Mary at Britain’s heaviest carp in 2001, when it came through at 59 lb 7 oz. That cemented its place in angling history – but it was just the start of the story…

The mega mirror held on for throughout the “Noughties”, with eight captors claiming official new highs. Two Tone still reigns at 67 lb 8 oz. It has been widely reported at 67 lb 14 oz … but scales checks dropped it by 6 oz.