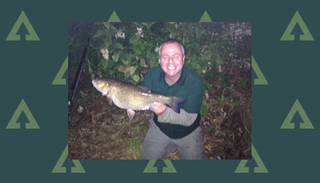 Russell caught the 8 lb 10 oz specimen from a secret location in Hertfordshire using lobworm. At its winter weight the fish could be 1 lb heavier.

The 47-year-old from Edmonton, North London, said: “I’m going to give the same stretch of river a go this winter when the 8 lb 10 oz chub may well beat the British record.”

The biggest reported river chub is a 9 lb 5 oz specimen to Neill Stephen from Hertfordshire’s River Lea in March 2012. Only the fact it was weighed in a flimsy plastic bag, which weighed something but didn’t register on the scales, meant it didn’t get a share of the British record.

The heaviest summer chub from a river was 9 lb 3 oz, reported from the River Thames by specimen angler Carl Welch. The Colne, a Thames tributary, has also produced a summer nine-pounder.