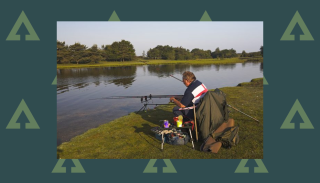 Hatchet Pond in Hampshire’s New Forest is a day and season permit water managed by the Forestry Commission.

Its stocks include  carp to over 40 lb, double-figure bream, plus specimen tench, roach, perch, pike and eels.

The 12-acre lake (pictured above) is a Site of Special Scientific Interest and is considered one of the most important wildlife ponds in England. But the FC and Natural England are concerned about deterioration in the water quality.

Top club Ringwood DAA run the fishing and are dismayed at the situation.

Ringwood DAA lakes manager John Sudworth revealed: “It is not an easy venue to fish, but does have some quality specimens.

“Natural England does regard carp as a non-native species and will remove them from waters it controls throughout the area.

“The same thing happened at nearby Cadman’s Pool which was cleared of carp but unfortunately some anglers then re-stocked them only for them to be removed again.

“Natural England did organise a public consultation meeting in February to discuss the issues about the pond and to reveal their proposals but had already made up their mind about the carp.

“They said at the time that they would try to re-home them but I have heard unofficially that this has not been possible so sadly it is likely they will be destroyed.

“I can see some anglers might take matters into their own hands and remove the carp themselves but we could not condone this,” added John.

And RDAA secretary Phil Nixon added: “We know for sure that the that they will electro fish the pond and remove the carp and I have heard from a reliable source that they won’t be transferred elsewhere.

“It is sad to think of these fine fish being destroyed but Natural England seem to be dead set against carp in any of their lakes. I’m sure an angling club elsewhere would welcome them,” he added.

The FC didn’t want to comment and Natural England via DEFRA failed to respond to requests for a quote.