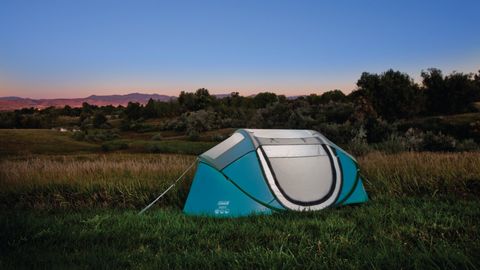 A pretty well made tent, ideal for festivals and warm weekends when your requirement are simple, but not enough space for multi-week holidays.

The Coleman Galiano tent is available as both a two- and a four-person tent, and we’d recommend both as two of the best-quality pop-up tents on the market if you just want a simple shelter without too many bells and whistles.

Like most pop-ups we’ve tested, they erect as soon as they’re freed from their circular bag, you just need to peg in the reflective guy lines. Inside, a thick nylon groundsheet keeps you dry and wide vents in the roof help with airflow.

Taped seams and a flysheet waterproofed to 2,000mm offer enough protection from all but the very worst weather you can expect during summer months, although this is primarily a single-skin design, so won’t be tough enough for other seasons, and there are only two guy ropes, which isn’t enough to fight off strong winds.

In terms of size, we’d recommend the two-person tent for one or two people, and the four-person for three adults or a family with two smaller children.

We tested out the larger four-person Galiano on a camping trip to Cornwall, in the far south west of England, and found it waterproof enough to deal with summer rain, and well-ventilated enough to keep you cool on sweltering days – especially as you can roll open the roof for a spot of stargazing and a hit of the cool night air, while mesh panels still keep insects out.

The groundsheet is one of the toughest we tried – no chance of leakage here. There’s not much room, or a separate porch for kit, though – you would need a pup tent if you had baggage and no vehicle nearby for storage, or you could save the Galiano for shorter weekend trips.

We’ve also seen other longer-term reviewers claiming the zips don’t last more than a few years of repeated use.