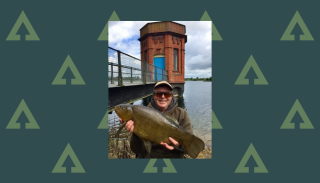 As Tenchfishers know, Sywell was the most noted tench venue in the UK in the 1990s.

The Northamptonshire water’s former heady days could be set for a return thanks to the Tenchfishers.

Some 30 anglers took part in the David Watson Memorial Project at the £8 a day, 67 acre venue.

Sywell gave some fine rewards including a top fish of 10 lb 3 oz (pictured above). The beauty, seen by the venue’s iconic tower, fell to Ade Holmes from top shop Fosters of Birmingham, a sponsor of the tench anglers’ organisation.

“David had recognised the rapidly declining tench stocks in the Edwardian reservoir from around the turn of the millennium. He had taken the initiative to work with the EA in 2012.

“This was the first anniversary of his death on June 9, 2016. Profits from the day are to finance further stocking of the reservoir.

“More tench larger fish in the 1 lb bracket are scheduled for early 2018 sourced from Arron Standing – a well-known tench breeder.”

Tenchfishers chairman Ian Peacock added: “The hope is to bring Sywell back to something approaching its former glory.

“There is no telling how successful we will be but we are determined to try.”

In the 1990s, Sywell was also famous for having a legering ban. Heavy weed made the technique unviable on the fish but the ban has since been lifted.