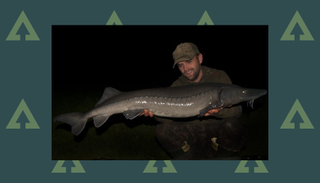 The shock Trent sturgeon (above) and 16 lb 10 oz barbel (below) came as a rare ‘brace’ from the in-form tidal stretches.

The 35-year-old, from East Retford in Nottinghamshire, revealed all about his Trent sturgeon and barbel catch, and his run of recent form.

Justin explained: “I’ve never caught a sturgeon before. I have always hoped of landing one but never would have believed it would have happened.

“I knew the conditions would be extreme on this trip, especially with a high spring tide thrown into the mix, but these kind of conditions get me a bit excited when it comes to barbel fishing.

“When I got there water was brimming the top of the bank but I was managing very nicely, and had my first barbel at 11 lb just as the light faded.

“I was expecting a massive tide to peak around midnight – and boy was it big!

“By 11.30pm it had rose about 5 ft and had washed all the debris of the banks. All of it was collecting in front of me, making my peg completely unfishable.

“At this point I’d reeled my rods in and was contemplating what to do next.

“One guy near me packed up and went home. The other reeled in his rods and went to sleep in his bivvy.

“Although, for me, there was only one option: I was there to fish.

“So I went for a walk to find a more fishable swim. I decided on a peg 100 yards upstream where the bank was clean.

“By 1am I’d set all my gear up and was fishing again.”

Justin revealed: “I’m a really big fan of big cage feeders and I rarely use anything else in my barbel fishing.

“And when the river is in flood I don’t try to get massive amounts of bait on the deck because it just gets washed away anyway.

“Instead I make a sticky mix with mainly scalded pellets and chopped boilies.

“Then I pack it to the feeder really tightly so it stays in there for up to an hour.

“This gives a long-lasting scent trail down to my boilie hookbait wrapped in paste.”

Now for “monster that rocks the angling world”

Justin has enjoyed an eye-catching run of form on the Trent in recent months.

“After a ten-year break from fishing I only got the buzz for barbel back when I saw someone land a 16 lb barbel in March while I was zander fishing.

“My short-term goal was to beat my 20-year-old PB but my goal for the season was a 16 lb-plus fish.

“Up to now I’ve had seven fish bigger than my original 13 lb fish, and I’ve improved my PB four times.

“Although I would love a big zander, too, barbel have got me by the nuts and I will continue in search of a real monster that rocks the angling world.”