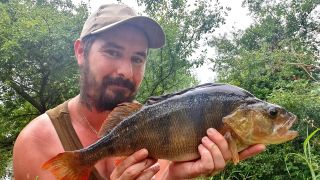 Scott Cordingly is practising hard for a marathon coastal charity walk by trekking along the River Thames, and his efforts have brought him some fine fish, including this PB perch of 3 lb 6 oz.

A 5.5 ft Advanta River Ambush rod and a few essential tackle items are often in his kit when going on walks, and they’re giving him welcome breaks.

Five miles into a training outing, Scott came across a quiet little cut leading to a weir, so he lowered two small worms on a size 10 hook into the deep margin.

The rod tip swung round just as the bait hit bottom, and after a lively fight he landed this super perch.

“I walk five-to-ten miles four days a week with my bag, which weighs nearly 20 kg, to condition my body into carrying weight for the long periods of walking ahead of me.

“I will be starting at Minehead, Somerset, on September 14, and it will take up to two and a half months to complete the path, which ends in Poole, Dorset, but I’m finishing at the end of Bournemouth Pier.

“It’s a journey of rediscovering who I am again, and finding out where my life will go after. I’m also trying to raise £1,000 for Mental Health Matters.

“There is going to be fishing, lobster diving and foraging along survival stretches, and if I don’t catch anything, I won’t eat. It’s a real test of character.

“I am documenting the entire journey, including the fishing, on my YouTube channel and my Facebook page,” Scott concluded.