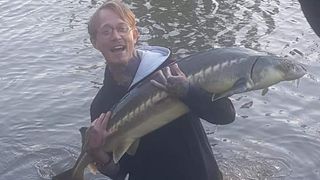 Connor Wiley had a real battle on his hands after hooking this estimated 50 lb sturgeon on light float tackle.

The 28-year-old children’s support worker from Bedworth was seeking small carp and bream when he hooked the giant at nearby day ticket Hawkesbury Fishery, in Warwickshire.

Connor explained: “It was caught last year at 48 lb, but I couldn’t find any scales big enough to even attempt to weigh it.

“It came after my last cast of the evening, at around 7.45pm. My girlfriend had just turned up, and I normally let her have a go while I pack up and drink beer.

“I put my float about 2 ft to the left of my peg, just under a little tree, to present a little bit of bread where I’d had just a carp and a bream.

“Within seconds, the float flew and the hooked fish created a big wave. I thought I was into a PB carp. I shouted over to my mate, Sam: ‘I think we are gonna need the scales for this one.’

“Sam brought them over, along with his large landing net. We didn’t even know that there was a sturgeon in the pool.

“After about ten minutes we saw the tail end of the fish and we were shocked. Everyone around the pool was watching me battle a sturgeon, hooked on a size 14 barbless hook and 6 lb line.

“It took me over to some lilies, and I thought that was the end of it, as it felt like a dead weight. But I walked back and it came free.

“After a 40-minute battle, we knew that there was no chance of landing it in the net, so I took my shoes and socks off and went into the pool.

“I only started fishing again about three weeks ago, and was after a PB carp, my biggest being 15 lb, which I caught some ten years ago,” added Connor.