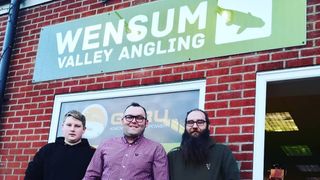 The night-time burglary took place at Wensum Valley Angling, in Norwich, Norfolk, but the goods were back with owner Dan Brydon six days later. The stock was worth over £50,000 and Dan’s own tackle about £6,000.

The 41-year-old match ace, sponsored by Matrix, explained: “I can hardly believe that I have got the stolen gear back so quickly, I’m still pinching myself. Norfolk Police have been fantastic in the way they have acted so fast.

“The day the break-in happened I was absolutely gutted. I got a phone call from the alarm company at 3am and arrived to find that someone had managed to break down the front door and cut through the protective barriers."

He added, “they seemed to know what they were doing, as they quickly went for the high-end rods.

“I was particularly upset that they stole my own personal match tackle, including four Matrix MTX poles with kits, as well as brand-new stuff.

“Me and the family have worked so hard over the past few years to build the business up, particularly so to keep things going during the lockdown period, and for a moment I even thought of giving it all up.

“But the support I have had from everyone both locally and around the country has been amazing. The video I put out has been viewed by over 300,000 people, and messages of support and offers of help have come flooding in.

“This has ranged from offers to repair the door to loaning tackle to replace my own, so that I could go fishing, as well as help clearing up the shop and information to help solve the crime. It’s been wonderful to receive so much support in such a difficult time.

“And I could hardly believe it when the Police contacted me after such a short space of time and said they had caught someone and had recovered the gear.

“They have now returned it and I’m going through it to catalogue it all and it seems to all be here intact, apart from a bit of damage to one or two of the rods.

“I would like to say I can now go fishing again, but frankly we have been so busy since the lockdown that I won’t have the time for quite some while. I’ve fished only a couple of matches the whole year. Business is actually booming,” Dan concluded.