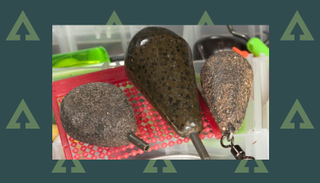 The action to stop the use of lead weights comes from Pallatrax boss Simon Pomeroy, whose innovative firm produce tackle and baits, mainly for carp fishing.

Simon met with cabinet minister Geoffrey Cox, QC, the attorney general, to demand action. He is Britain’s highest legal adviser to the crown and prime minister.

Simon has also started an on-line petition to the minister responsible, DEFRA head George Eustice, which has reached nearly 100 signatures straight away on the change.org website.

Simon explained: “A small group of us are determined to ensure this serious and dangerous pollutant of the environment is removed once and for all and a clean up of our waters is undertaken.

“For a long-time lead has been known to be a poisonous substance that is particularly harmful to children and has been barred from all its common previous uses like in petrol, paint, and toys.

“Yet in the unregulated tackle industry it continues to be used with impunity.

“And tackle companies backed by angling magazines actively promote and sell tackle rigs that deliberately drop off large lead weights where they remain to pollute the environment.

“This gives a tidy profit to the companies as anglers continually replace them and coming on top of accidental breakages, means our waters contain literally tons of harmful lead.

“It poisons invertebrate life, damages fish and can get absorbed into the food chain.”

Simon continued: “Some 31 years ago lead split shot was banned in sizes from No. 6 up to 1 oz after concerns that water fowl were being harmed by ingesting large quantities, but lager sizes were seen as ‘safe’.

“We know better now and the European Fishing Tackle Trade Association has called for lead use to be phased out by 2020.

“I wrote to both the Environment Agency and DEFRA about the problem but received bland responses, so I managed to arrange a meeting with Geoffrey Cox, the attorney general about the need for legal change.

“He was very receptive and said he would follow up with the relevant departments but unfortunately they are misinformed about the dangers and apparently unconcerned about the situation.

“Fortunately the European Chemicals Agency has just produced an authoritative report on the harm caused by lead’s use in both shooting and fishing and called for it to be banned.

“We hope this acts as a catalyst for change in this country and the authorities take notice as the tackle trade is unlikely to.

“When the ban on lead split shot was proposed people feared there would be no alternative but Dinsmores proved otherwise, and I’m sure other products can be developed as required.

“My company produces a natural stone version but I’m not setting out to promote this – I’m sure other cheaper solutions made of different substances can be developed.

“Some tackle companies will say they have taken preventative steps by coating the lead with plastic but this will eventually disintegrate and pollute the environment itself.

But Angling Trust policy chief Martin Salter said: “Those few carp anglers who are deliberately discharging leads once a fish is hooked in weedy waters are doing so in the interests of fish welfare as a big carp is less likely to become tethered and can be landed safely.

“The Trust do not support further regulation in this area. Our priority is to fight polluters who allow vast quantities of toxic chemicals, sewage and slurry to poison our rivers, lakes and coastal waters every year.”

You can visit the petition set by Simon Pomeroy by clicking HERE.