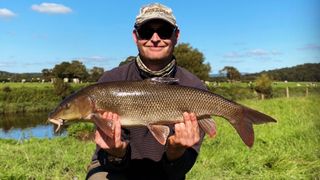 Bus driver Ian Cooper achieved his target of a 2 lb roach from his local river, but only after falling in at the start of the session and losing his glasses and a wireless microphone worth £360.

The 38-year-old angler was lucky that the incident wasn’t worse after slipping in up to his chest in his local River Ribble at Preston, Lancashire.

All turned out well, as he then landed a fin-perfect 2 lb 1 oz roach and seven barbel to 9 lb 15 oz from the free fishing stretch.

Ian explained: “Being a bus driver has its advantages. Crossing the river bridge you get to watch the river levels from what is effectively your office window.

“After working a gruelling seven-day straight shift, and watching the river conditions meticulously through the course of the week, I knew that the river was in immaculate condition, so I set my target to catch a 2lb roach and a 10lb barbel.

“I was more than ready to fill my boots, but I got more than I bargained for. I had a run-in with the notoriously slippery Ribble mud, known to be the slippiest mud this side of the Pennines.

“I slid down the bank and went straight into the river. I was chest deep in the water, lost my glasses, wireless microphone and a little bit of pride.

“After clambering back up on the bank, £360 out of pocket, I was even more determined to have a great day.

“The sun shot up high in the sky along with my spirits. I began to dry off and the fishing was exceptional.

“The highlight of the day was a beautiful 2lb 1oz roach – target achieved, and I fell short of a barbel double by 1 oz.

“I used Lamprey & Smoked Herring pellets from 3 Foot Twitch for all the fish, two 8mm pellets to tempt the roach and a single 14mm one for the barbel.

“I fished small feeders with mixed 3-6mm pellets in the feeders, plugged both ends with dampened liquidised pellets. This day will certainly be remembered. It’s one to tell the grandchildren about,” concluded Ian.