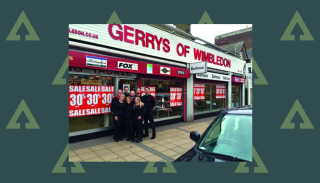 Gerry’s of Wimbledon is shutting more than 56 years after it first opened as a fishing tackle shop.

Rumours of its closure have been about for months and last week owner Clive Doughty, who has run Gerry’s for the past 42 years, signed the contract to lease the property, which he still owns freehold, to a furniture store.

Clive revealed: “I didn’t need to sell the business or anything like that and could have carried on, but a carrot was dangled and I’ve decided to retire.

“Originally I was approached by Fishing Republic but I turned them down, but then one of their directors who I know got in touch and I decided to have a proper look into it, and got an agent to come in and assess the rent.

“By then I’d also had interest from Glasgow Angling and Farlows of Pall Mall, but when I got back to them with the figure for the going rate for the rent, all three said it wasn’t viable for them at that price.

“The agent was confident they would get offers at the price they’d given me, but it wouldn’t be for a fishing tackle shop, so I put it on the market.

“I was away on holiday with my wife the day it went on the market and within 24 hours five parties had shown an interest, and within two weeks we’d had an offer that was above our asking price!

“I think a lot of people in the trade have known for a while that I was looking to retire so won’t be that surprised – although there had been all sorts of rumours, including one from another local tackle shop that I was selling, long before I’d even thought about doing so!

“The tackle trade has changed a lot during the time that I’ve been involved, especially in the last few years,” added Clive.

Gerry’s will be opening its doors as a tackle shop – and closing them – for the last time on Sunday, March 27.