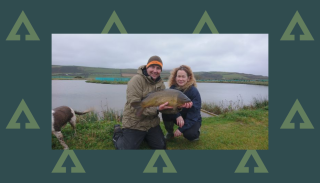 Isle of Man now has a quality coarse venue. After a decade in the making, the five lake complex called Sunset Lakes, is located in the town of Peel …and it is creating history.

The fishery has an on-site restaurant, tackle shop and four holiday lodges, that sleep four people in two bedrooms.

Isle of Man is a self-governing British Crown dependency in the Irish Sea between England and Ireland and already offers great sea fishing.

It is 32 miles long and 14 miles wide and visitors can either fly or catch a ferry from Liverpool.

Fishery manager Tim Russell explained: “The project has taken over a decade to come to completion, and we have worked closely with the Isle of Man Government to make this happen.

“Coarse fish are not native to the island and there are a few small ponds with roach and rudd which were actually brought over in buckets by airman who were based here during the war.

“And there are some perch in a few of the trout reservoirs. Previously only salmon, trout and sea fishing has been readily available.

“The lakes are stocked with carp, tench, roach and rudd. We have a carp lake with fish to over 20 lb, a tench lake and three mixed species pools including a match lake.”

Tim continued: “There is already some interest in coarse fishing on the island and the match lake has been booked for the day we open, and we have sold some advance tickets for the ten peg carp lake.

“Apart from local trade, we are hoping to attract tourists who want some coarse fishing but also might want to enjoy many of the other attractions on the island, including the motorbike racing and the sites of historical interest,” he added.

The lodges at this Isle of Man venue cost £950 per week in the height of summer but cheaper off peak.