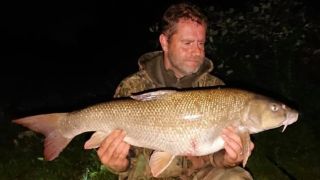 Barbel ace Jerry Gleeson is in fine form, and recently managed this 14lb 2oz ‘beard’ on a 48-hour charity guided session on Nottinghamshire’s River Trent. Resting his swim by not fishing was key to success.

The 46-year-old chef from Stockport, Greater Manchester, said: “I was able to get some of my own fishing done, but after selecting a swim and setting up camp I discovered someone had been in it for 18 days. Fortunately for me, as it turned out, they’d only caught one barbel. Unfortunately, I didn’t know how much bait they’d put in.

“I could have moved swims, but this one had some key features. Instead of trickling in bait all day and putting the rods out early evening, I opted to rest the swim during the day and fish big baits at night.

“I wrapped double 18mm Mad Baits Pandemic boilies in paste on my upstream rig, and presented half a tin of meat on the downstream rig.

“I had two singles and one of 12lb 7oz by midnight on the first night, then nothing until 4am, when a 13lb 4oz fish made an appearance.

“Come first light, I brought the rods in, rested the swim all day, then at 7pm put baits back on the spots.

“After an early fish, at around 9pm, the swim died. In the early hours, big fish returned and rolled in the swim, and another barbel came at 4am. It weighed 14lb 2oz. That was the last of the action. With a storm on its way, it was time to go home,” added Jerry.