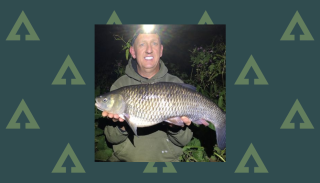 The River Lea was where the giant came from, and it has a long pedigree with jumbo chub in certain areas in Essex and Hertfordshire.

In fact, Den has caught an even bigger River Lea chub than this 8 lb 1 oz chunk – and it has rocked the British record.

Den explained: “With conditions not at their best lately along our rivers, it’s been even more important too stay mobile and keep looking all the time. I can’t stress this enough.

“Sometimes, even with very low water levels, big chub can be spotted in the most unlikeliest of places on the River Lea.

“With very limited fishing time lately, and conditions not favourable, I was going to have to be very quiet and ready too move, so limited tackle once again.

“With one or two swims in mind ,my first aim was too wait until an hour or so before dark and introduce a few free offerings, that being mostly maggot and small amounts of pellet.

“I kept this trickling in until light levels had almost faded.

“A simple link leger set up with a 10 mm boilie was the plan.”

Den continued: “I was unable too get into the first choice swim as someone had gone into it, something that happens on pressured venues.

“But the other swim I had baited was free and just as darkness fell I gently introduced my hookbait by an overhanging willow.

“Within 10 minutes or so I received a few gentle knocks and rattles, and my hand was paused over my centrepin.

“Some 20 minutes passed and the rod tip just hooped right over the centrepin screamed.

“As I lifted into it, I was met with a heavy nod trying too get down into the willow roots so I leaned as far forward as I could and pulled gently but firmly to my right side.

“I kept the pressure on, and suddenly it’s head came up out into mid-water and as I flicked on my head torch I got sight of this huge chub.

“I reached over for my net and at full stretch eased her over it. Oh god, I thought, she’s huge.

“I rested her in the net while I called Ginger Kev whom was fishing just up the bank from me and a few minutes later we were both starring into the net with head torches on.

“We both looked at one another, and just laughed.

“She was my second eight-pounder from the venue, the last being 8 lb 10 oz.

“Now it is time to concentrate on another favourite of mine – the perch,” concluded the River Lea ace.