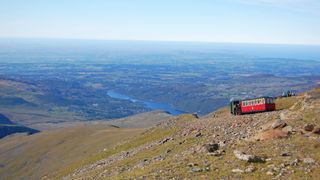 Discover Snowdonia by standing atop of Mount Snowdon in Wales’s northwest region, and you will be blown away by the views it has to offer. Snowdonia is a gem of Welsh culture, scenery, and heritage to be enjoyed by everyone who visits. Named ‘Eryri’ by the Welsh, deriving from the Latin meaning of ‘highlands’, its diverse landscape offers so much more than hills, including beaches, castles, valleys, woodlands, and a charming town – all of which stretch from the southernmost areas of Cadair Idris, the Tarren range and the Dyfi hills, to the northernmost areas of Moel Hebog, Mynydd Mawr and the Nantlle Ridge.

Across Snowdonia, multiple castles and historic heritage sites offer a bountiful insight into Wales’s fascinating history. King Edward I created Caernarfon Castle in the late 11th century and to date, it is one of the most impressive castles in Wales. The birth of the first English Prince of Wales took place inside the castle in 1284. It was also the setting for the 1969 investiture of the current prince of Wales, His Royal Highness Prince Charles – these are just some of the engaging roles the Welsh have played in Great Britain’s compelling heritage.

In addition to Caernarfon Castle, Harlech Castle, Conwy Castle and the ruins of Cymer Abbey attract thousands of visitors every year, and are definitely worth a visit for any history buff. Away from architecture, legend has it that the fierce giant Rhita Gawr, vanquished by the gallant King Arthur, is buried among the region’s namesake, Mount Snowdon.

Legends aside, Mount Snowdon is the largest mountain in England and Wales. Standing proud at 1,085 meters (3,560 feet) tall, it is a favored challenge for experienced hikers to sink their teeth into. At the summit of its daring peak, vistas of beautiful scenery roll across the landscape. Nearby, thrill-seekers will find the fastest zip wire in the world, while wildlife enthusiasts can spot the peregrine falcon and ravens nestled along its rugged cliffs in their natural habitat.

After the explorations have come to a halt, visitors will be able to indulge in plentiful traditional Welsh food found around the friendly region. As breathtaking as the views are, the area is one of the wettest places in the entire country, so be sure to pack your waterproofs, wellington boots and umbrellas. Accumulating an average of 4,473 millimeters (176 inches) of rainfall per year for the past three decades, Crib Goch, to the north of the park, has the dubious honor of having been crowned the wettest spot in the United Kingdom.

Snowdonia’s stunning national park was the third such conservation area of its kind to be established in Britain (in the 1950s) after the famous Peak District and Lake District. It boasts 2,130 square kilometers (822 square miles) of incredible scenery teamed with 60 kilometers (37 miles) of coastline, including the picture-perfect Cardigan Bay. Snowdonia National Park is also home to more than 1,000 mountain goats, although exactly how these animals came to live there nobody really knows for sure. Approximately a quarter of these enchanting animals can be found around the Beddgelert region. The park’s cliffs are decorated with hardy Arctic alpine plants, including the delicate Snowdon lily. Lower down, visitors find themselves surrounded by beautiful woodlands of oak, alder, and wych elm.

For more articles like this, sign up for the Advnture newsletter and get a FREE World's Greatest National Parks ebook.