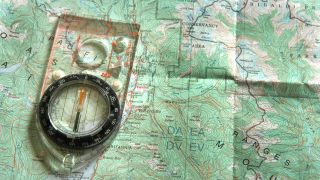 With the evolution of handheld GPS units, and smartwatches and phone apps with navigation capability, some might wonder if they still need to know how to use a compass. But many experienced walkers and hikers feel exposed if they don’t have a magnetic compass in their kit bag during a trek. And for good reason.

This age-old technology, which harnesses a frankly mysterious force generated by the planet, has been used by explorers and navigators for centuries. It isn’t reliant on battery power, internet coverage or satellite reception, and no matter how far off the beaten track you stray, or how long you’re out there for, it will reliably point the way. If you actually know how to use it, that is.

And there’s the rub. Plenty of people pop a magnetic compass in the pocket of their walking jacket or backpack without any idea how to use it to take or follow a bearing, or even orientate a map. The good news is, mastering the basics is relatively easy.

How does it work?

A traditional compass has one key component: a magnetised needle, which spins freely within a housing, with one end constantly drawn towards Earth’s magnetic north pole. The north-facing half of the needle is typically red, identified with an ‘N’, and features a luminous strip for navigating in low light.

A classic protractor-style Silva compass is comprised of two elements: the baseplate, which often features various elements useful for map reading and wayfinding (including arrows, measurements and a magnifying lens), and the housing, containing the aforementioned arrow.

The baseplate is usually made from clear plastic, so you can see the map and gridlines through it, and will have a ‘Direction of Travel Arrow’ at the top, typically featuring a luminous strip on the forward-facing line.

Good baseplates have scale converters on the long sides (showing, for example, that on a 1:50,000 map, 1cm represents 500 metres on the ground) and are inscribed with standard ruler measurements (mm) on the small straight edge. In addition, there’s often a small magnified window for looking at fine detail on maps, and ‘aid lines’ that make it easier to set your map and take a bearing.

Mounted on the base plate, typically close to the rounded end, is the circular housing unit, containing the all-important magnitised needle. On a good quality magnetic compass, the housing will contain a clear fluid, which dampens (slightly slows and steadies) the needle as it spins, allowing it to settle in place once it has a fix.

The housing is topped with a rotating circular bezel, inscribed with the cardinal points of the compass – N (north) S (south) E (east) and W (west) – along with graduation markers indicating degrees (0-360).

Lastly, you will see an ‘Index Line’ (or ‘Dash’) marked on the top edge of the compass housing, beneath the degree markings on the housing, which aligns with the direction of travel arrow on the base plate. This doesn’t move, so it indicates the bearing set when the bezel is rotated.

At the outset of any walking adventure it is a good idea to establish which way is north and to ‘set’ your map, so it’s facing the same way as the physical terrain in front of you.

To do this, turn the bezel until the orienting arrow and the red N is directly above the index line (dash), pointing up towards the direction of travel arrow. Hold the compass flat in the palm of your hand and slowly turn on the spot until the needle also aligns with the orienting arrow, N and the direction of travel arrow. You are now facing due north.

If you repeat this process while holding the compass on the map with orienting lines aligning on the compass housing aligned with the map’s North–South grid lines, your map will be correctly ‘set’. If you can see a peak or some other notable feature directly in front of you, you should also be able to identify it on the map. Ideally you should do this at regular intervals during your trek, to make sure you know where you are and which direction you’re travelling in.

One of the most common compass-reading techniques used by hikers traversing wild terrain is to take a map-to-land bearing, then following it to reach a desired destination. You can do this by setting your map and following three easy instructions:

If you’re following a bearing over a short distance, it’s fine to keep it simple. If you want to plot a really accurate course of travel over a lengthy distance, however, you need to take something called ‘Magnetic Variation’ (called ‘Declination’ in the U.S.) into account.

To counter this discrepancy, you need to apply the correct amount of Magnetic Variation, an angle that varies according to where you are, but which is stated in degrees in the key of all good topographical maps. For example, if the map key specifies a declination of 2° W, you subtract 2° from your bearing by turning the bezel clockwise; if it specifies 2° E, you add 2° to your bearing by turning the bezel anti-clockwise. (Good compasses will feature guides to these measurements, which can be seen in red on either side of the Orienting Arrow.)

Unfortunately, the Magnetic North Pole doesn’t stay still – it fidgets about a lot as the Earth's magnetic field changes. Over the last century, it has shifted over 1,000 kilometers towards Siberia, so the newer your map is, the more accurate the stated Magnetic Variation information will be. (Maps usually state the annual change in Magnetic Variation alongside the publication date, so you can figure it out even if the map is old.)

Because the pull direction of the planet’s magnetic field changes according to where you are on Earth (it pulls vertically at the poles, but more horizontally towards the equator), most magnetic compasses are balanced according to the part of the world they’ve been designed for use. So, a magnetic compass intended for use in Britain will not work so well in Australia.

There are no industry standard zones, but Silva is the dominant player and many manufacturers use their zones. If you have a Silva magnetic compass, have a look at the bottom of the baseplate, beneath the housing and in line with the Orienting Arrow, and you should see two letters. Compasses designed for use in the UK, North America, Europe and most of Asia will have the letters ‘MN’, meaning ‘Magnetic North’. Compasses for use in Australia and New Zealand will have MS (‘Magnetic South)’, but there is also an ME (‘Magnetic Equator’) zone that takes in much of Africa and most of South America.

Some brands, for example Suunto, produce a universal magnetic compass that should work well anywhere on the planet.