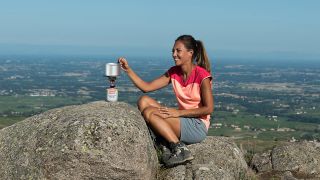 How to choose a camping stove should be top of your kit list questions whether you’re heading off to spend a weekend wild camping or packing the car for a family outing under canvas. After all, nothing beats a morning cup of coffee before you hit the trail, and few things are as welcome as a hearty meal after a long day spent hiking with a heavy pack. Besides, as we all know, food just tastes better in the great outdoors.

And though a blazing campfire has a certain romanticism, it’s not always a practical or ethical option, particularly in wilderness areas. In comparison, a lightweight backpacking stove that lights easily and cooks quickly is far preferable. Even on a campsite, lighting a fire simply to cook bacon and eggs is rarely the most efficient way to start a day – far better to get out your gas burner and crack on with that fry up.

But the right camping stove for you depends on a number of factors – namely, where you’ll be using it, the conditions you’ll be cooking in and how far you’re traveling with it. To help you pick the stove that is best suited for your needs, we’ve rounded up the most popular options and weighed up the pros and cons of each.

Probably the most popular type of stove for most backpackers and wild campers, a screw-in type stove basically consists of a lightweight burner head that screws on to the top of a canister filled with a mix of propane and butane or isobutane gas. The advantages of these stoves are that they are lightweight, packable and easy to use. The gas burns cleanly and efficiently, even at low temperatures – although if you’re camping in cold weather, look for a canister with a higher propane content in the mix, which will give better performance. Because they sit on top of the gas canister, screw-in type stoves can be a little unstable. They can also be susceptible to wind, which greatly impairs performance, so it’s worth finding a flat, sheltered spot before you fire up your stove, as well as using a portable windshield.

The cheapest screw-in type stoves start from around £10/$15. They are usually very simple, with little to go wrong. Spend a little more and you will get additional features however, such as a more powerful output, a bigger burner head for a more even spread of heat, wider pot supports for increased stability and versatility, and a carry pouch or case to help protect the stove. Most importantly, the best screw-in stoves have integrated pressure regulators. This controls the flow of gas to the burner for enhanced fuel efficiency and performance in all conditions.

Screw-in type stoves are compatible with almost all threaded gas canisters in C100, C250 or C500 sizes. These are fitted with a resealable ‘Lindal valve’. Common gas canisters of this type include Jetboil’s Jetpower, MSR Isopro, Primus Powergas and Coleman’s Performance and Xtreme series. These canisters are the most common type and are widely available in the UK and US, as well as most of Europe. Note that the manufacturer Campingaz also make two other types of gas canister for use with their stoves, which are not compatible with other brands. This is the ‘easy-clic’ fitting and the pierceable-type fitting.

Another common choice for backpacking trips are hose-fed stoves. These have a burner head that sits on tripod legs (so they look a bit like a spider), with a braided metal hose that attaches to a remote gas canister. The main advantage of these systems over screw-in stoves is that they sit lower to the ground, so are more stable and less susceptible to wind. In many cases, the gas canister can also be inverted, which improves cold-weather performance and delivers a better supply of gas to the burner even when your canister is running low. The disadvantages of these stoves are that they are bulkier and heavier than screw-in types.

Best for: Backpacking and wild camping in a group

In the last ten years or so, a new type of backpacking stove has become hugely popular: the all-in-one stove or personal cooking system (PCS). These consist of a burner head with a screw-in type fitting along with an integrated, insulated cooking pot. Both elements are designed to lock together, forming a cohesive and compact nesting system, making them a fairly packable option. The leading brand in this market is Jetboil (with their Zip, MicroMo, Flash, MiniMo and Sumo systems), but other brands also make similar stoves, including the MSR Windburner and Reactor, Primus Lite, Coleman Fyrestorm, Alpkit Brukit, FireMaple X2 and numerous others, including lower-priced options.

Generally, these systems offer fast boil times and excellent fuel efficiency. That’s because the burner is fairly well shielded from wind, and the integrated design means that maximum heat is transferred from the burner to the pot. Most all-in-one stoves feature a heat exchanger on the base of the cooking pot for better heat transfer too. The all-in-one design offers portability and convenience – everything you need to use the stove is included, which means you do not have to buy a separate cooking pot. As such, they’re a common choice for solo campers and backpackers, though the larger systems are also suitable for cooking for two or three people. It’s worth noting that, just like screw-in type stoves, these systems sit on top of the gas canister and so can be more unstable than other designs – though they usually come with a gas canister support to provide a more stable base, and hanging kits are also available, which allow you to use the stove off the ground. They’re also not as lightweight as some other stoves.

Best for: Backpacking and wild camping solo or as a duo, general outdoors use (fishing, etc)

Liquid fuel stoves run on white gas (or naphtha, but often referred to as ‘Coleman fuel’), kerosene (also commonly called paraffin) or petrol. Multi-fuel stoves like the MSR Whisperlite can run on any of these fuels. Some can burn diesel and other liquid fuels too but check the manufacturer’s recommendations. They are robust and reliable, while their versatility means they are a preferred choice for remote expeditions, where fuel can be difficult to come by. They work well in variable temperatures. On the other hand, they can be heavy and bulky, and are a bit fiddly to operate. They may also need regular attention in terms of cleaning and maintenance to ensure consistent performance. However, they are well-suited to cooking for large groups or for expedition basecamp use, where weight and components can be distributed among the group.

Best for: Basecamp expedition use, adventurers in remote destinations

Alcohol stoves have been around for decades, so there are many different types, ranging from ultralight alcohol or ‘meths’ stoves like the Caldera Cone to the iconic Trangia system. They burn non-pressurised denatured alcohol – called methylated spirits or ‘meths’ in Australia, New Zealand, South Africa, and the United Kingdom.

The most common meths stove is the Trangia, a classic design that is still used by adventurers all over the world – particularly by Scouts and DofE groups. The meths is burnt from a reservoir, while a sliding disc provides heat control. Some slightly more advanced designs allow meths to enter between twin walls, where it vapourises and exits under pressure to burn from outlet holes located around the rim. The system comes as a complete cooking kit. It’s an easy to use stove that is ideal when catering for large groups. Generally, however, Trangias are slower to cook with than gas canister-type stoves or pressurised liquid fuel stoves. They’re also not as fuel efficient and it can be a little tricky to control heat output. But it is a much-loved design that remains popular today.

Other alcohol or meths stoves focus on minimising weight and pack size. These very simple but effective designs can be very efficient, particularly for lightweight or extended backpacking trips. They are also cheap, as is the fuel required. They are not as quick to boil water as gas though and need shielding from wind and cold to perform effectively – which is why most users employ a windshield and a pot cosy.

Best for: Backpackers on a budget, Scout and DofE groups.

Solid fuel stoves are simple, compact and lightweight. So is the fuel, and nor can it be punctured, spilled or lost via evaporation, which is why these systems were originally developed for use by the military. Solid fuel is smokeless, energy-efficient and leaves no ash. Solid fuel stoves are most effective when simply heating water (e.g. for rehydrating ration packs) rather than cooking complex meals. That’s because boiling and cooking times are not very fast and there is poor heat control. You basically unfold your stove, light the fuel, put your mug or pan on top and wait! Common fuel types are Esbit or Hexamine (‘Hexy’) tablets, which can often be found in military surplus stores as well as in outdoor shops. Some types tend to leave an oily residue and have a pronounced odour – they should only be used in well-ventilated spaces as the fumes can be toxic.

Increasingly, wood-burning stoves are becoming more popular among backpackers. These designs simply burn twigs, pinecones and other small bits of wood, meaning they do not consume fossil fuels. The latest designs can be surprisingly efficient. Gathering your own fuel on the trail also means, of course, that there is no need to carry fuel bottles or gas canisters around (or worry about disposing of them safely after your trip).

The simplest wood-burning stoves are a flat-packed metal frame that combine a windshield with a pan support, as well as a base on which to light a very small fire. This can be both a compact and lightweight option that in some cases weighs little more than the lightest alcohol burners.

Another popular option is the volcano kettle, often known by the brand names Ghillie Kettle or Kelly Kettle. This design is impressively efficient and with a decent supply of dry wood can boil water in a few minutes. Although only able to boil water rather than cook meals, cooking kits are also available to heat up small amounts of food. Its main drawbacks are that it is comparatively heavy and bulky.

A more advanced innovation is the BioLite stove, a wood-burning stove that can be used to heat water or food, but which also converts heat from the fire into electricity to recharge your phone or other devices. It is fairly effective, as well as being unique and fun to use, but also relatively heavy.

Best for: Camping trips below the treeline

For trips where weight and packed size aren’t an issue, such as car camping on a campsite, this stove is a solid choice. These stoves have one or two full-size burners and are better suited to making meals for a group or family. They typically use tall, thin ‘twist and click’ butane (or propane-butane) canisters or larger, refillable gas bottles, such as those used for gas barbeques. Similar to cooking on a gas hob at home, these burners can be used with a variety of cookware and usually have auto-ignition as well as good simmer control. They tend to pack flat into a self-contained, boxy unit and have an integrated windshield.