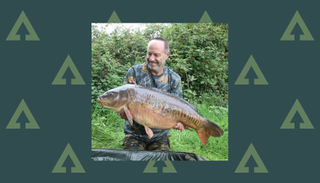 He also had his own bands, including The Floaters and Dorsal Fin

And he had been successful with carp long before the sport boomed to what it is today.

Close pal Andy Jackson said: “I have known Terry since we were lads together fishing Radipole Lake way back in the 1970s where he caught several of the big mirrors, fishing just day sessions.

“Terry also caught the big Warmwell mirror at 37 lb 12 oz in the early ’90s… a whopper back then.

“He may well have had the legendary giant common had he been able to stay on as they tended to come out together but he had to pack up for one of his many teaching sessions.

“He made his living playing and teaching guitar and was a fine musician.

“We spent many happy days fishing the Dorset Stour at Throop and Manor Farm and Terry caught double-figure barbel and 5 lb chub.

“Terry was about my age of 60 and his health was never an issue in all the time I knew him of well over 40 years.

“He was very popular and was a part of so many peoples’ lives. Goodbye my oldest and most trusted friend,” concluded Andy.

Lee commented: “We played together on many gigs in the Carp Society Super Group and Terry was a brilliant guitarist and I played bass.

“He was a great bloke and we fished together a few times, including a memorable five days on Redmire.”

The UK lockdown due to the coronavirus crisis means that currently anglers are told to not go fishing.

The overwhelming majory of anglers have complied with the instruction.

But Police have moved a few people on, including some who had driven considerable distances to wet a line.

Hints have been dropped that angling is being considered to be at the ‘front of the queue’ amongst outdoor sports as soon as lockdown rules are relaxed.

But no date to fish again, or for fishing tackle shops to reopen, had emerged when this story went online.