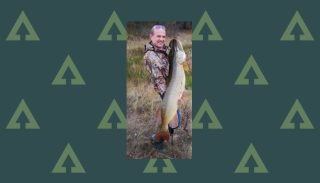 The giant that we can show you here – also possibly the world pike record – was caught in Bulgaria almost exactly a year ago. It weighed a whopping  55 lb 12 oz.

It stayed firmly ‘under the radar’, despite being above the previous IGFA world pike record of  55 lb 1 oz, caught way back in 1986 at the Lake of Grefeern, in Germany, by Lothar Louis.

The Bulgarian fish was a whopping 140 cm long – a full 7 cm more than the 58 lb 14 oz Czech giant that we revealed last week, to Lukaz Matejka.

Captor of the Bulgarian fish Petar Filipov explained what could, briefly, have been the world pike record.

He said: “I am a lure fisherman, and only go spinning for pike these days, often using home-made lures.

“I have been fishing since I was four, and fish whenever I can, and have caught plenty of pike, but only ever before up to 23 lb, so this fish more than doubled that.

“The water is an old, small reservoir that used to have ample stocks of ‘bait fish’, but for some reason most seem to have disappeared, and I wondered whether predation by large pike was a possible factor.

“Once before I had a specimen of 30-40 lb snatch a smaller pike I was reeling in then snap the line above the trace.”

Petar continued: “After struggling to catch, I decided to fish only big lures and completely different spots, like for example deep holes that I hadn’t fished before… and it worked.

“As soon as I hooked her the water erupted. The beginning of the fight was brutal, but it didn’t take much time.

“She ran for ten metres three times, and after ten minutes she was mine. I was surprised that she didn’t jump or shake her head at all.

“She was massive, and I was thinking how to land it without hurting her, but fortunately she was really calm when I took her out of the water.

“I am not aware of any other pike anywhere near this size being caught in my country,” Petar concluded.

Regardless of what really is the world pike record, a number of pike above the British record of  46 lb 13 oz have come from European waters.

That official British record was caught at Llandegfedd Reservoir, in South Wales, by Roy Lewis back in 1992.

The largest river-caught specimen, at 47 lb 4 oz, was landed by Ake Nillson from Sweden’s River Lodde in January 1989.

The American pike record of 46 lb 2 oz has stood since 1940, and was caught by Peter Dubuc from New York’s Sacandaga Lake.

The biggest authenticated ‘esox’ of all time came from a gravel pit in Darmstadt, Germany. It scaled 67 lb 1 oz, but this was net-caught.