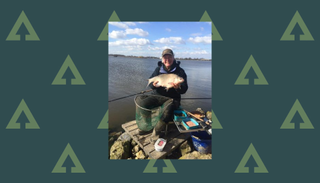 Anglers across the UK and Europe have been cheered by the news that Denis White remains very much a living legend of the match scene.

He was released after a lengthy period in an intensive care hospital ward bed battling the Covid-19 infection.

Prior to Easter, close friend and angling protégé Tommy Pickering said that Denis’s situation was ‘touch-and-go’. He also described him as “the best fighter I know.”

A huge outpouring of delight and relief was evident after Tommy announced that his mentor had pulled through and been discharged from hospital to recover at home.

Tommy said: “He still has a couple of problems, but will get better.

“For once in his life he’s listening to his kids’ and friends’ advice.

“Rest, rest and rest!” said Tommy, who thanked all well-wishers on behalf of Denis.

How hero Denis White was diagnosed

Denis White is a true hero of match fishing for many anglers in the UK, and abroad.

Nicknamed ‘Fatha’, he was multi-capped for England between 1979 and 1997, making 17 World Championships appearances and collecting four team Golds along the way.

A prolonged period of ailments for Maver-backed Denis was followed by symptoms suggesting coronavirus infection.

Tommy explained: “It all started a few weeks ago.

“Denis had an operation to straighten some bones in a hand, but for whatever reason recovery from that went badly and infection set in, which eventually needed hospital treatment. Then he caught pneumonia.

“Coronavirus infection is obviously a huge risk for hospital patients, especially the elderly.

“Denis has been tested for it four times – twice negative, the third time positive, then the most recent one negative again.

“As I understand the situation, nobody knows for certain if or how much that’s a factor.”

Tommy Pickering and other Maver match anglers appeared in an online video recently, recorded at their own individual homes.

They thanked NHS staff and all essential workers, and advised anglers to stay at home during this crisis. That message has been emphasised by the Angling Trust and other top anglers.

And seriousness of the problem for everyone, including anglers, was highlighted by the death of another South Yorkshire match angler.

Former Daiwa Goldthorpe match squad stalwart Dave Ludlam has been mourned after his death early in April due to coronavirus infection.

Dave had been a committed member of his local village’s Bolton Upon Dearne Voluntary Action Group.

He was helping them distribute essential supplies to vulnerable and stricken households, before a sudden and rapid deterioration in health preceded his sad passing.

And top carp angler Terry Cheesman was also amongst the sad casualties to die after catching this horrible virus.